Caplin Platform can be deployed in several different architectures to support various security and resilience requirements.

Because end-users can access the Bank’s data feeds and trading systems from the Internet, the Caplin components and Bank systems should be allocated to networks that are secured behind appropriate firewalls. The following diagram shows a standard 3 tier security model, based on a security zoning of firewalls and networks. The zones have increasing levels of security from the top to the bottom of the diagram. 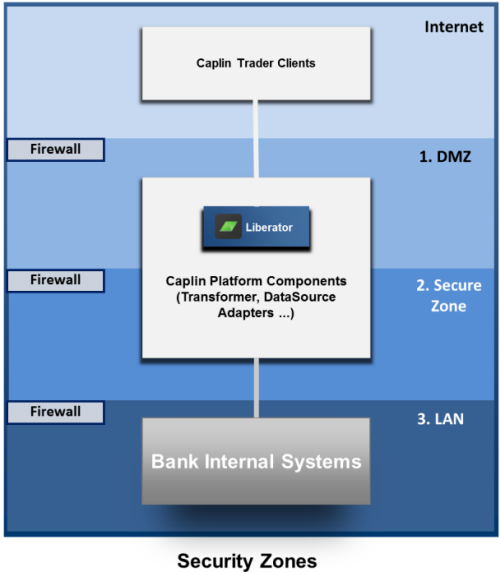 The Internet is the publicly accessible zone and is insecure. The client applications, such as applications implemented using Caplin Trader, typically execute in this zone.

Caplin Platform is typically deployed with multiple component instances to provide resilience against hardware, software, and network failures. To help achieve this, the hardware and software components

can be arranged in processing units called "failover legs". In normal operation, all the components in a single failover leg – typically Liberator, Transformer, Integration adapters, and the Bank’s internal systems – work together to provide the system’s functionality. If a component fails (or a connection to it, or the machine on which it runs), the operations provided by that component are taken up by an alternative copy of the component running in a different failover leg. This transfer of operation is called "failover".

The following diagram shows a single leg deployment of an installation. This is the simplest configuration and does not provide failover if a component, machine, or network connection should fail. 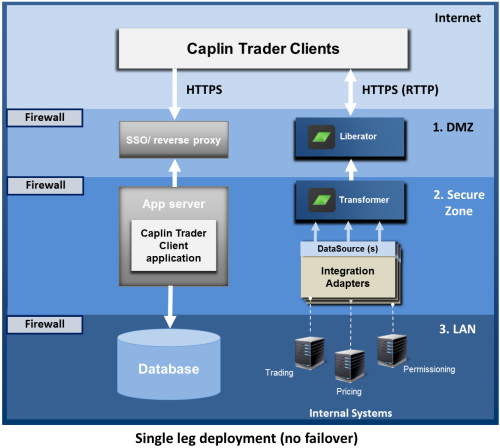 Assuming the Caplin Trader client executes in a browser, it is deployed on an application server behind the Bank’s existing single sign-on (SSO) system (see Authenticating Client Sessions). Clients access the server through HTTPS, and after the user has signed on, the client application is downloaded to the browser from the application server. The application may use a database for persistent storage of data, such as user-modified layouts. The Caplin Platform server components (Liberator, Transformer, and Integration adapters) interact with the client in the browser; streaming price information to the application in real-time, exchanging trade messages, and supplying permission information.

The diagram shows how components can be deployed to conform to the security model previously described (see Security Model):

The arrows show the direction in which connections between components are initiated. The directions are typically determined by the security model. In this example, as the Liberator is in the DMZ, it is not allowed to initiate the connection to the Transformer in the Secure Zone, as this would violate the security regime; the connection attempt would be denied by the firewall. Instead, the Transformer initiates the connection, which the Liberator listens for. Similarly, the Integration adapters in the Secure Zone are not allowed to initiate connections to the Bank’s highly secure internal systems in the LAN zone; instead they listen for connections from the internal systems.

To ensure low-latency and high volume streaming throughput, it is recommended that you do not install a reverse proxy between Liberator and the clients. See Reverse Proxies and Liberator.

When the Caplin Trader client executes in a browser, Liberator listens on the HTTPS port for client traffic (using the RTTP protocol). Connections between Liberator, Transformer and Integration Adapters use the DataSource protocol, based on TCP/IP. Connections between Integration Adapters and the internal systems may use the protocols of standard market data platforms (such as TREP), or they can use other proprietary protocols. The connection between the application server and the database is typically through JDBC.

Port usage is fully configurable within Caplin Platform, and within most application servers and databases. For more information, see Default Port Allocations.

To ensure resilient operation, Caplin Platform should be deployed using multiple component instances across multiple failover legs, as shown in the following diagram. 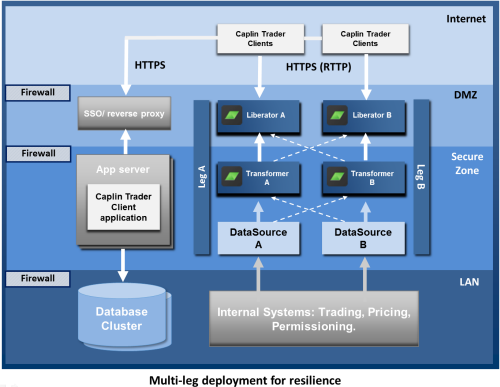 The diagram shows a single geographical site running Caplin Platform and associated software, within the security regime described in the Security Model section. At startup, Legs A and B are independent of each other, and are used to balance the transaction load. Each leg is configured the same way and is connected to the same internal systems for pricing, trading, and permissioning. If a Caplin Platform component detects a significant reduction in quality of service during operation, it automatically instigates failover to an alternate instance of the component – the corresponding instance in the other leg. For example, if Liberator A fails, the clients connected to it fail over to Liberator B.

Failover connections are configured for each component instance. To meet the requirements of the security regime (Liberators cannot initiate connections to Transformers) but still allow failover, and to reduce the time taken to fail over, the connections between pairs of failover components are made in advance when the components start up, rather than during a failover event. The dotted arrows show connections that are made in advance but are not active (transmitting data) until a failover occurs. For example, in the diagram, when Transformer A starts up, it connects to the failover Liberator B in addition to Liberator A (the Liberator it normally talks to).

For more detail on how failover works, see Failover Scenarios.

For maximum resilience, both Caplin Platform and the application server components should be deployed across multiple sites. The following diagrams illustrate an example deployment across 3 geographically distinct sites. Sites 1 and 2 are "hot" sites – that is, they are live installations. Site 3 is for disaster recovery purposes; if the whole of Site 1 or Site 2 should become unavailable, the software at Site 3 is started up and the client connections that would have been handled by the now unavailable site are routed to Site 3 instead.

Deployment across a WAN

You may need to deploy your Caplin installation across several sites and share data across those sites. For example, you could have a site in New York serving North American FI customers, and a site in London serving European FI customers. The Bank’s pricing system in New York supplies US Bond prices, and the pricing system in London supplies European bond prices. Customers in both regions wish to see and trade both US and European bonds, so pricing information must be exchanged between the two sites over a relatively slow wide area network (WAN). The following diagram shows an obvious, but not recommended, way to do this. In this deployment, every Pricing Integration Adapter is connected to every Transformer, so that every Transformer can receive prices for all instruments. 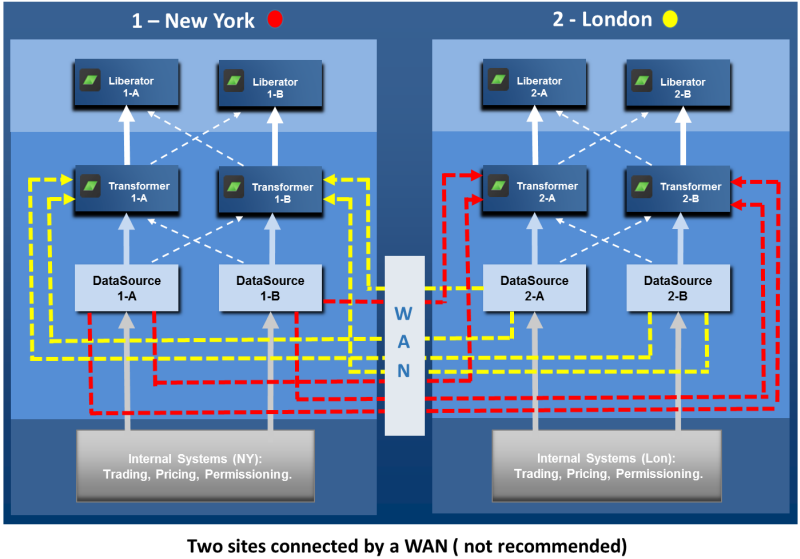 However, this approach is not recommended for the following reasons:

These problems become more acute as more regional locations are added. For example, adding a third site (Tokyo) increases the number of Transformer to Integration Adapter connections from 8 to 36. The following diagram shows a recommended approach to connecting regional sites: 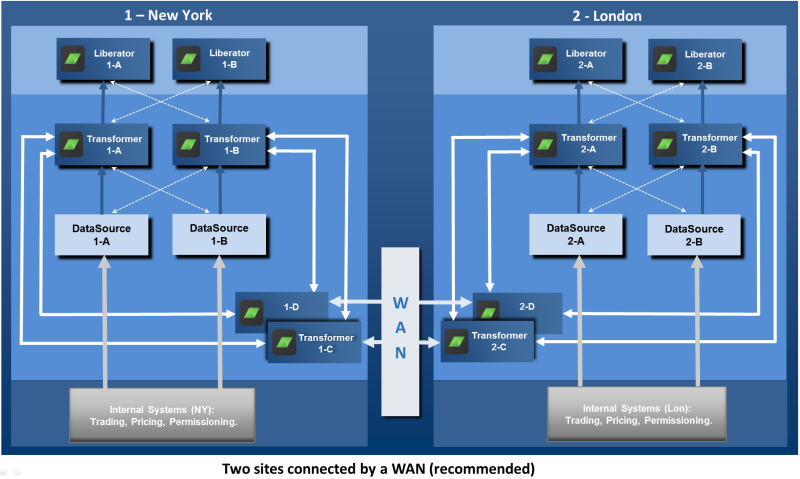 Each site has an additional Transformer: '1-C' in New York and '2-C' in London. The sole function of this Transformer is to route subscription requests and price data updates for non-local instruments to the appropriate remote site, where they are received by the corresponding Transformer at the remote site and passed on to the relevant Integration Adapter. This arrangement has several advantages:

When a component fails, Caplin Platform will react to maintain quality of service on each failover leg. The following scenarios show how failover is handled for each component type.

library built into the client. When the client connects to the alternate Liberator, all previous instrument subscriptions and trade channels are restored. 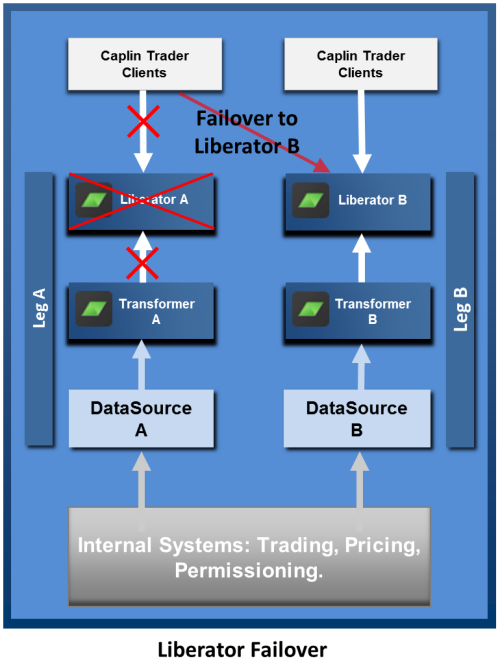 The end-user does not have to explicitly log in to the alternate Liberator; this happens automatically in the background using a KeyMaster token hosted by the application server. For more information see Authenticating Client Sessions. 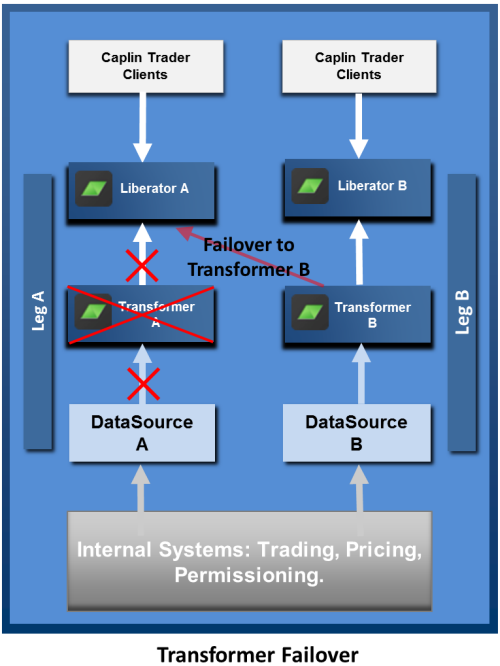 On loss of a DataSource (Integration Adapter) instance, or loss of connection to the DataSource, the connected Transformers use failover connections to maintain quality of service. Clients remain connected

to the same Liberator instance, so the failover is not apparent to them. 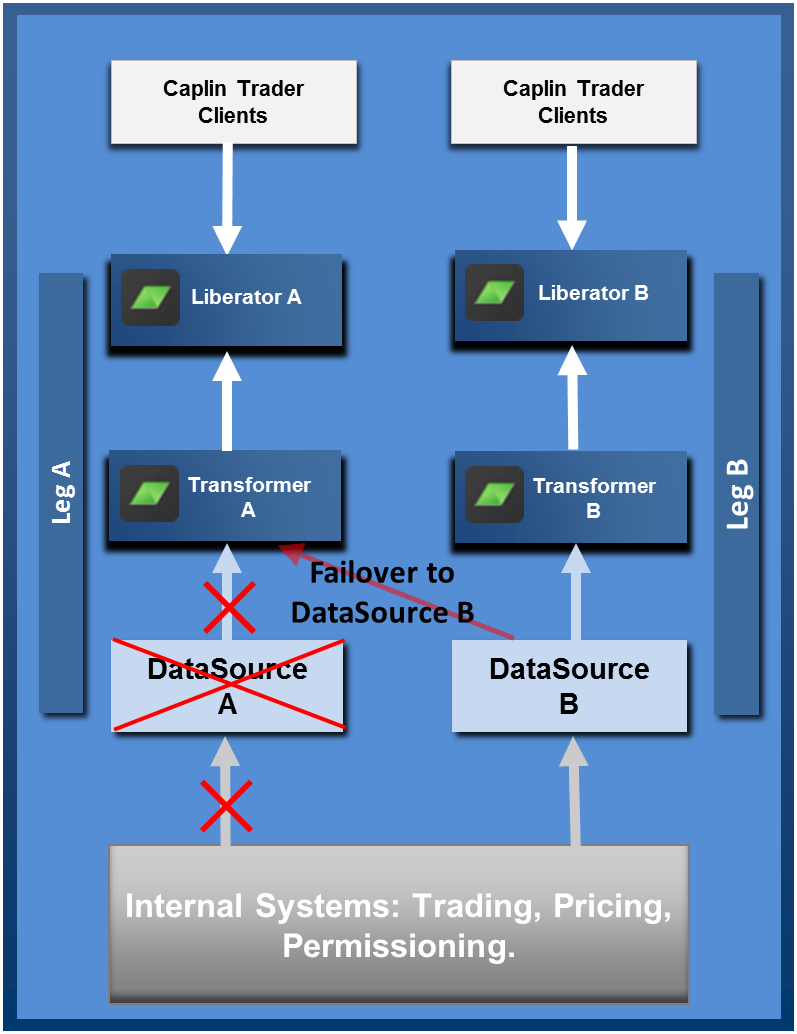 Client sessions should be authenticated through the Bank’s existing single sign-on (SSO) system. Once an end-user has signed on, the Caplin Trader client logs the user on to the Liberator (via the StreamLink library built into the application) This can be done automatically using Caplin KeyMaster. KeyMaster is software that integrates Liberator with an existing SSO system, so that end-users do not have to explicitly log in to the Liberator server in addition to logging in to the Bank’s single sign-on server. The following diagram shows the role of each component in handling sign-on and authentication of client sessions, and shows the main steps of the authentication process, assuming that KeyMaster is being used. It assumes the client runs in a browser. 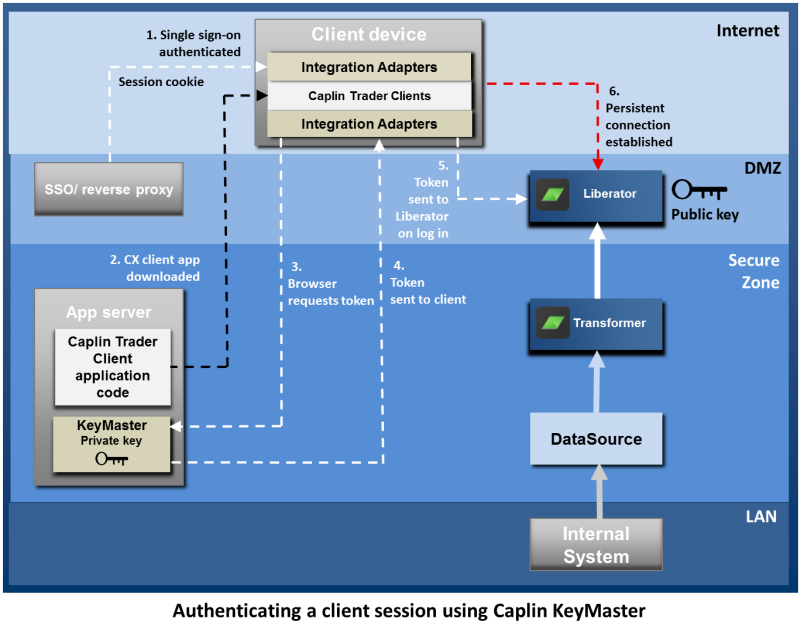 The end-user signs on to the Bank’s portal site. The sign-on process is handled by the Bank’s existing SSO system, which sends a session cookie back to the browser.

Note that KeyMaster tokens may only be used once and expire after a configured timeout.

If Liberator fails over, repeated authentication against the SSO is not required; instead, the client requests a new KeyMaster token [steps 2-5] before logging into the alternate Liberator instance. For more information on client authentication using KeyMaster, see the KeyMaster Overview.

The Caplin Management Console (CMC) allows you to monitor the behavior and performance of all Caplin Platform components including Liberator, Transformer, and Integration Adapters. The CMC establishes separate JMXTM connections to each Caplin Platform component. Each server component listens on an RMI registry port and an RMI client port. The JMX runtime uses a static JMX service URL to perform a JNDI lookup of the JMX connector stub in the RMI registry. Authentication of CMC sessions follows the same principles as client session authentication (see Authenticating Client Sessions). First the CMC requests a KeyMaster credentials token from the application server, then it uses the token for secure login to Liberator. The security implications of connecting a monitoring device directly into the live business data networks should be considered. Caplin Platform allows you to run your monitoring application on a completely different network, should this be a security requirement; this is shown in the following diagram: 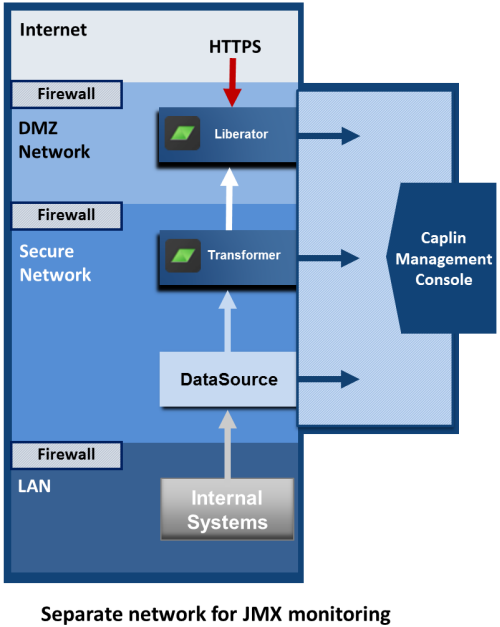 In the diagram, the Caplin Platform components and internal systems are on separate networks and communicate across firewalls. The monitoring connections (RMI Registry and RMI Client) for Liberator, Transformer, and the Integration Adapter connections, are to a Monitoring Network which is completely separate from the other networks. The Caplin Management Console is also connected to the Monitoring Network.