Manifest files are processed by the JavaScript bundler and the CSS bundler, but they are not compulsory; if a library.manifest is not present in the folder of a particular third party library, the bundlers will revert to the default behaviour described under Rules, below.

A third-party library manifest is essentially a Java .properties file with the name "library.manifest". It contains the following keys: 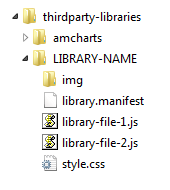 Contents of a sample library.manifest file

Now, when this library is referenced, it will load amcharts as a dependency.