A tutorial to guide you through the actual process of using Verifier to test a trade tile component.

The Verifier framework simplifies the creation and execution of tests for complex components such as trade tiles. In the Presenter Worked Example we created a simple trade tile using the Presenter library. Any Presenter component, such as the tile, is composed of a presentation model which consists of fields and properties and an HTML view the elements of which are bound to the properties in the presentation model.

In this tutorial we’re going to create an acceptance test for that trade tile, to check that the view-model bindings between the Presenter component model, and the template it is using are correct. If you have not worked through it yet, you may want to familiarise yourself with what we did in the Presenter worked example before you embark on this one.

These tests could then be integrated with a Continuous Integration build environment (Jenkins, Go, or similar), to provide automated regression testing as part of the build process for a project.

As was the case for the other worked example, we’re using an application called TutorialMotif with the namespace tutorial and a blade called simpletile. In the tutorial for Presenter we created the tile in a bladeset called presenter. the purposes of this example we will make a separate bladeset, although in practice tests will live inside the working blades. So, first launch the BladeRunner dashboard for TutorialMotif and create a new bladeset called verifier so that you can build on it while leaving the Presenter tutorial untouched. 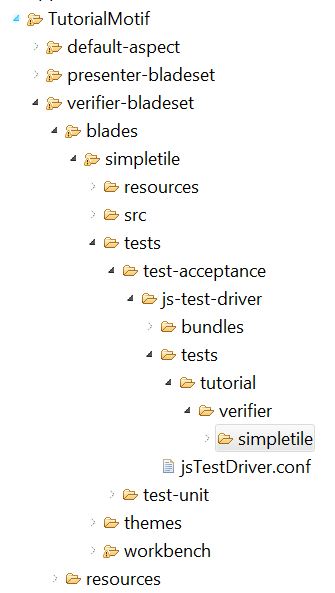 Next you’ll create and populate the jsTestDriver.conf file in the js-test-driver directory as follows:

This configuration file is very sensitive when it comes to spacing, for this file to be parsed correctly ensure each line that begins with a dash is preceded by two spaces only (no tabbing).

We’re going to write an acceptance test which opens the tile and sets the buy and sell property values on the tile’s presentation model. What we expect when this is done, is that the tile’s view (HTML representation) will reflect these values, rounded to three decimal places, and that they will show up in the right places. Create a test file called SimpleTileTest.js and populate it with the following code:

Because the syntax is quite user-friendly and "human readable", it’s fairly easy to convey the objective of each test. Before the test will run however, there are some things that need to be done:

The SimpleTileTradeFixtureFactory is what associates the tile. property reference to the tile component via a fixture. You’ll create it in the next step of the tutorial, before you run the test.

The first line of each test will begin with a given, which, unless it continues from another test, will use a fixture to create the Presenter component and its view. The second clause, when, then accesses the model of the component and sets the buy/sellRate property value. In this case, the then clause accesses the view to check the resulting value. It uses a jQuery selector to locate the DOM element where the set values should appear.

The SimpleTileTradeFixtureFactory needs to create any fixtures which will be required by the test. These may be generic fixtures, or possibly a bespoke fixture will be required. The tests we’re performing are view-model binding tests, so the generic fixtures should be sufficient. In particular we need to register the PresenterComponentFixture that will be used, passing it the appropriate view template and presentation model that the tile uses. The fixture factory’s contents should be as below.

Before running the tests, we will need a browser to serve them. First ensure that test-runner.conf, found in BladeRunner’s conf directory, has at least one reference to a browser. For example, under browserPaths: we should see something like chrome: C:\Program Files\Google\Chrome\Application\chrome.exe

For the purposes of this example, to view how the results look when we have failing tests, remove the DecimalFormatter.js file along with the references to the formatter in SetupPresentationNode.js (instructions on adding this back in will follow).

You should now be ready to run the tests, by starting the server and running the appropriate test as described in the Verifier overview.

While modifying or adding individual tests it is sometimes convenient to temporarily remove tests that don’t concern us so we can repeatedly run our tests as quickly as possible. To remove an entire suite of tests from the test-run, we simply replace describe with xdescribe. Likewise, to stop an individual test from running within a suite of tests, we replace it with xit:

Using this method will enable us to run a smaller sample of tests, while still being able to continue from the tests that we have temporarily removed. For example, in the test above, the first test is not run, however we can still run the following test which continues from it. Another benefit of using this apporach is that it makes it much easier to find removed tests in the code, the test results will also reference the tests that are not running.

While you are creating your tests, watch out for the following common pitfalls and omissions:-

You may receive an error while running the bladerunner test or test-server commands, if you do not have at least the Chrome browser correctly configured in your test-runner.conf file. Find this configuration file in your {bladerunner_root}/conf directory, and ensure that the path to the browser’s exe file is correct for your machine in the browserPaths: section of this file.

You may receive an error if the XML bundler is not included, or you do not have the appropriate initialisation code in your jsTestDriver.conf file. For example, if the file only contains …​

then add the following line to your jsTestDriver.conf file:

This will then automatically bundle all XML in your application, and make it available within your code.

In addition, you need to ensure that each test file includes the first line:

If you’ve already applied a formatter to the buyRate and sellRate in the SetupPresentationModel, then the tests should pass and you will see the following result output:

If you have not applied a formatter, the tests will fail. In order to implement the expected behaviour and get the tests to pass, you’ll need to create a formatter to round the values to three decimal places and apply it to the buyRate and sellRate properties.

Next, apply the formatters to the properties:

When you now run the tests, they should discover the expected values and pass.