This page provides an initial overview to Caplin Trader 3, and introduces a few of the key concepts.

Caplin Trader 3 (CT3) is a complete development suite for creating HTML5 trading applications. It includes BladeRunner, Verifier, the Caplin Trader Libraries, and a selection of required blades, bladesets and motifs. Usually, a completed app will also include the Caplin Platform, which provides streaming data and trade services that integrate with various pricing, security and trade execution components. The following screen shot is of our demonstration Caplin Trade application, showcasing features typically seen in financial trading apps. 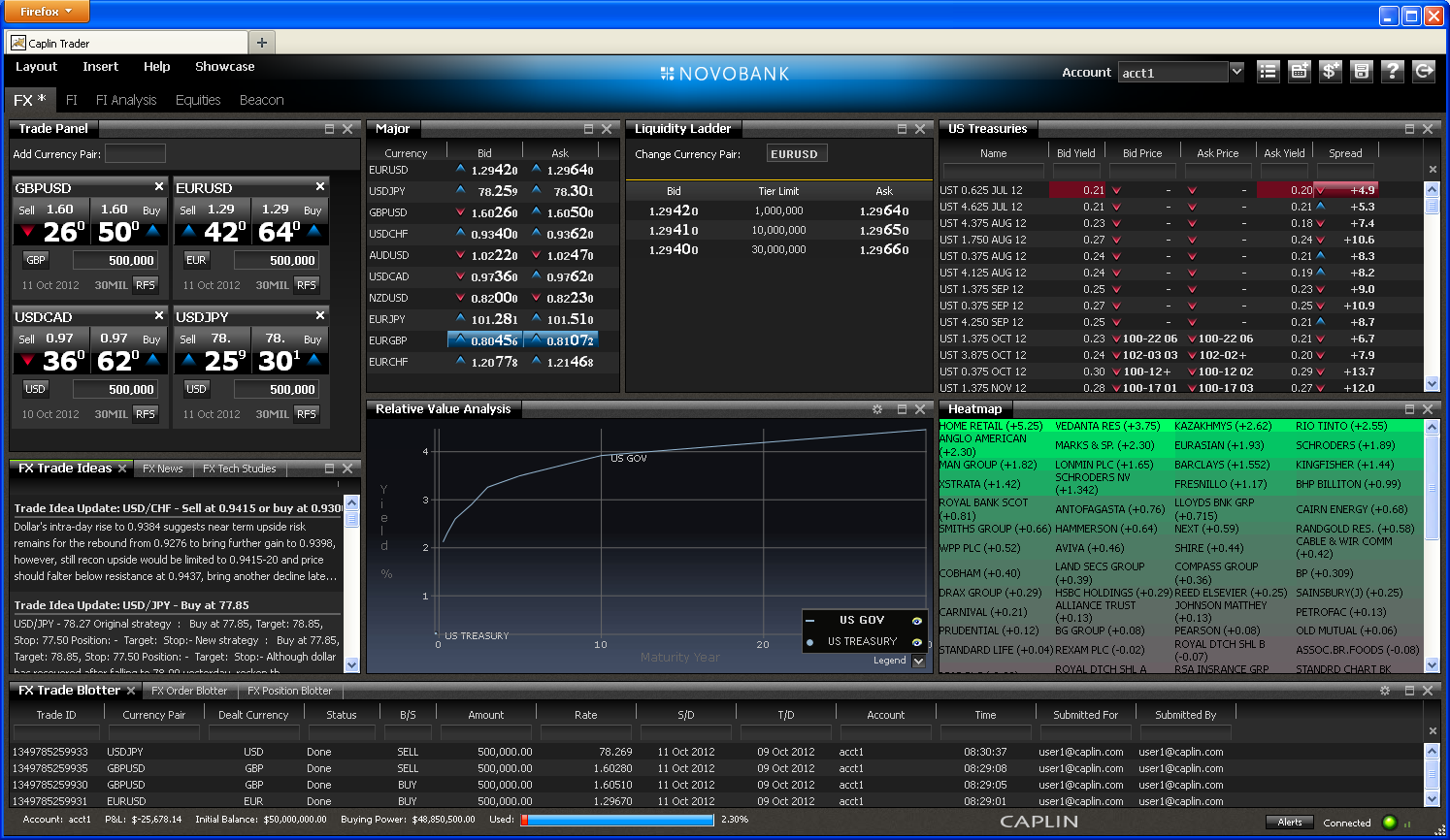 As you can see, a Caplin Trader app consists of independent but co-operating components: pricing grids, FX spot tiles, a blotter, an RFS ticket, graphs, and so on. Caplin Trader provides a standard interface to which all components must conform. The components are organized by a "layout manager", which is responsible for positioning the components on the screen and managing the interaction between them.

The example above uses Webcentric, which is one of Caplin Trader’s layout managers. It organises the app into a set of tabbed layouts, only one of which is visible at a time. Each layout consists of a set of panels that can contain any feature that conforms to the Caplin component interface. Webcentric also provides the menus and buttons seen at the top of the page.

All layout managers provided by Caplin, manage features that implement the Caplin component interface. You are free to use Caplin’s pre-written components, or develop your own. If you already have a set of components that conform to another standard (JQuery UI Widgets, for instance), it is usually a relatively simple matter to write a set of adapters.

Caplin components access shared resources through a well-defined set of service interfaces. When your app starts, it creates the instances that implement those services. You can use the implementations provided by Caplin or write your own. This would allow you, for example, to replace the Caplin Platform with your own pricing and trading services.

As a rule, each component is implemented as a BladeRunner blade, which includes any test code and a workbench that enables you to develop and run the component in isolation. Groups of related blades with shared functionality are encapsulated in a bladeset. The view shown in the screenshot is implemented as an aspect. The aspect consists of a homepage and a layout manager, which can then include components from any bladesets in the app.

You can build any web trading app you like with CT3. However, to short-cut the process of creating a new app, Caplin provides a number of "motifs". A motif is a complete, pre-built BladeRunner project, that you can use as a starting-point for your own application. An app is created by simply importing the ZIP file in which the motif is delivered. The FX-trading app shown in the screenshot is one such motif, also see the Caplin FX Motif. Once imported, you can modify the app as you please, adding and removing blades, applying your own theme, and so on.

Learn how Caplin Trader fits together…​