What is an NDF?

A non-deliverable forward (NDF) is a derivative of the FX Forward market and is a type of contract for difference (CFD). It is used to hedge exposure to a currency in which trading in outright forwards is prohibited due to regulatory restrictions.

Setting an NDF on a tile

In the FX Professional web app, a user would be allowed to do a spot trade on USDINR — US Dollar (USD) against Indian Rupee (INR) — but would not be allowed to trade forwards due to regulatory restrictions. Using an NDF Tile, a user may execute an NDF as a type of forward contract on USDINR.

By subscribing to a counterpart currency pair such as USDINF, you can launch an NDF Tile and submit an NDF for a USDINR:

As you can see, the NDF Tile is the same as the standard FX Tile except for the Fixing Date and NDF Indicator. In addition, spot trading is disabled on an NDF Tile. NDF currency pairs such as USDINF will typically have a different list of tradeable forward tenors to their deliverable counterpart (USDINR). 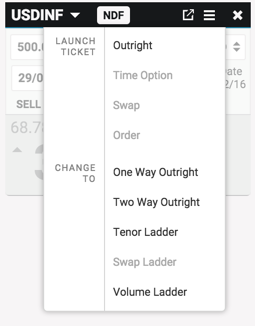 The process of trading with an NDF Tile is the same as with an FX Tile:

NDF Tiles are effectively the same as standard FX tiles, except for the following differences:

How a tile identifies an NDF currency pair

When determining whether a currency pair is NDF enabled, the currency pair’s TenorDates record is checked. For NDF-enabled currency pairs, the TenorDate record includes a FixingDates field where a list of values is returned, and the value of the ForwardType field is "NDF" as opposed to "STANDARD":

When trading an NDF, the Submit message is submitted with all the standard fields except the value for the TradingType field is set to "NDF" as opposed to "FWD".