The FX Integration API is a back-end Java library which you can use to easily integrate the FX Sales Motif with your existing systems. The library consists of a set of APIs that provide the data expected by the FX Sales Motif in the exact format required.

These APIs fully support the core features of FX Sales, including (but not limited to):

When using the Motif back-end system - Caplin Platform - to integrate with your existing back-end systems and stream real-time data to your client applications via the internet, the server-side APIs that you interact with are generally based on receiving requests and sending messages made up of fields. These fields are simple key/value pairs. The FX Integration API enforces a contract with the FX Sales Motif that enables developers to implement DataSource Integration Adapters conforming to the pricing/trading workflow that the Motif expects, without being overly concerned with field and message specifications.

Thus the FX Integration API enables you to fully utilise all of the FX Sales Motif features. It greatly reduces the amount of time developing integration adapters by writing a small amount of high level domain-specific integration code rather than writing a lot of low-level boilerplate code to build up raw messages and manually set fields.

See the following sections on how this is achieved.

The back-end technology of the Motif is powered by Caplin Platform; this allows for integration with any back-end system to stream real-time data to your client applications over the internet using Liberator. The bottom diagram shows how you would typically use the Caplin Platform architecture to integrate with an external Trading System and Pricing System to send data to a front-end (client) application. 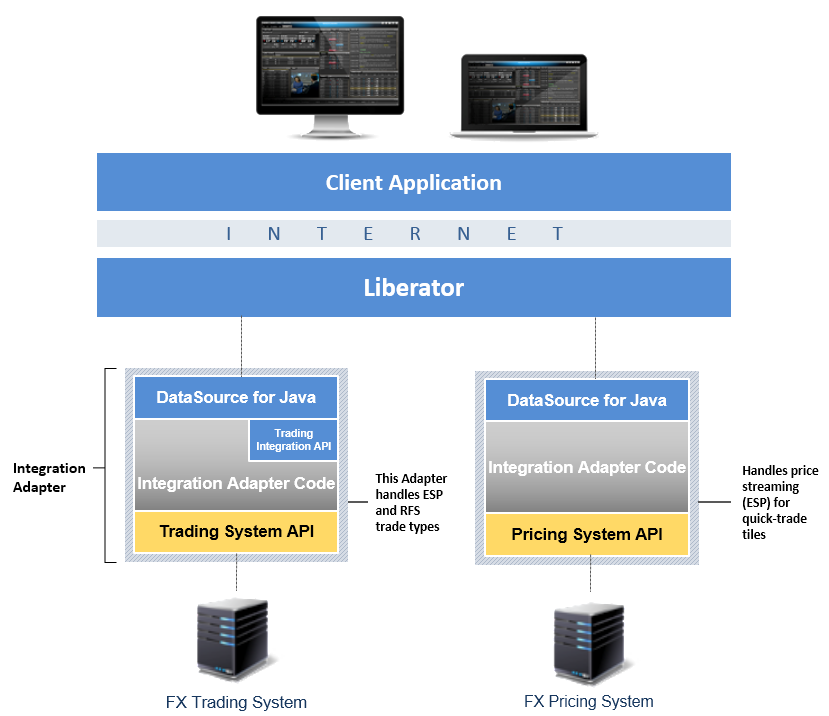 Two DataSource Integration Adapters are illustrated in the diagram above; one for sending streaming prices to the client application and one to handle trading.

For each coloured layer:

For the Pricing Integration Adapter

It has a simple three-layer structure.

When the Pricing System responds to the request, the flow is simply reversed. The bottom layer will call into your custom code with a price update for the requested currency pair and tenor. Your custom code is then responsible for transforming the update into an equivalent message that it can pass into DataSource for Java. The DataSource for Java library will then send the message to the Liberator, which will then distribute it to all of the subscribed client applications across the internet.

For the Trading Integration Adapter

This Adapter is very similar, except that it makes use of one of the higher level helper APIs which sits on top of DataSource for Java. In this case it uses the Trading Integration API, which takes care of some of the lower-level message parsing and also allows you to define a state model for each type of trade using XML; where the model will be enforced by the library.

Supplied with the FX Integration API is an Adapter Suite containing the source code for a number of example Integration Adapters, which demonstrate best practises on how to use the API.

These example Adapters implement two notional business names by convention. Novo is short for Novo Bank, and represents a bank that wants to provide an online trading facility for internal sales traders to trade on behalf of the bank’s customers using the Caplin FX Sales Motif. Typically, the developers at Novo Bank would be responsible for writing the Integration Adapters using the FX Integration API, in order to link the bank’s systems with the Motif.

The other name we use in the example Adapters is BTS, which stands for Best Trading System. This represents a trading system or OMS used by the bank, for example Refinitiv Electronic Trading. The BTS code provided is intended to provide just enough canned data and mock behaviour to make the FX Sales Motif work. For example, it will generate canned FX rates and confirm trades. This allows most of the functionality in the Motif to work when running against the Novo Adapters, such as streaming rates and basic trading.

The example Adapters consist of a thin layer of code between the BTS system and the FX Integration API. When you look at the example adapters, you should treat the BTS code as a black box and concentrate on the Novo code in the middle layer, because this is the code you would typically write as a developer working on the FX Sales Motif integration.

By starting with the FX Integration API you gain a number of advantages over developing a DataSource Integration Adapter using the generic DataSource for Java library. You also lose none of the freedom to augment the messaging with your own custom fields or send your own streaming data; which is completely custom to your application.

Using the Adapters with the FX Sales Motif

Once you have deployed the FX Sales Motif, you can then begin customising the Novo Adapters, or simply use them as a reference to build your own Integration Adapters from scratch. The provided suite of Novo Adapters deliver the functionality required to use the following features:

See the FX Sales Motif Architectural Overview for more details on its features and concepts.

Benefits of the FX Integration API

Here are the main benefits to using the FX Integration API to integrate with the FX Sales Motif rather than the lower-level message parsing APIs like DataSource for Java:

Writing a DataSource Integration Adapter involves writing some low level code to handle things like building and sending messages, or providing the latest data from a cache if you receive a request from a new peer. We have identified the common boilerplate code that is written when creating adapters to integrate with various external systems, and moved it into the FX Integration API. This all means your custom code becomes smaller, faster to write, and easier to test.

Freedom to extend, customise and bypass the FX Integration API

Although the FX Integration API is specifically built to meet the exact requirements of the FX Sales Motif, it is fully extensible and customisable. As an example, if you wish to customise the Motif to send some extra fields on an RFS trade, you will find that the object representing an RFS Submit event allows you to read fields by name in addition to calling the built-in getter methods.