BladeRunnerJS was originally developed in-house as part of Caplin Trader, but as the concepts proved to be applicable to any kind of large-scale HTML5 application, it was released as an open source project, BladeRunnerJS.

In these tutorials we will be using Caplin Trader 4, so that you have all of the financial trading libraries and components available to you in addition to the generic functionality provided by BladeRunnerJS.

In this tutorial you are going to:

The same procedure is used to install BladeRunnerJS and Caplin Trader. The difference between these two products is the additional range of libraries that are available in Caplin Trader.

If you had installed BladeRunnerJS you would be able to create new HTML5 web applications or import motifs that are built on the core libraries available in BladeRunnerJS. These libraries include:

A motif is a canned application incorporating a set of functionality and components that can be obtained as a whole and imported into the BladeRunnerJS server as a starting point, or to be customised. Motifs consist of a number of bladesets and blades. 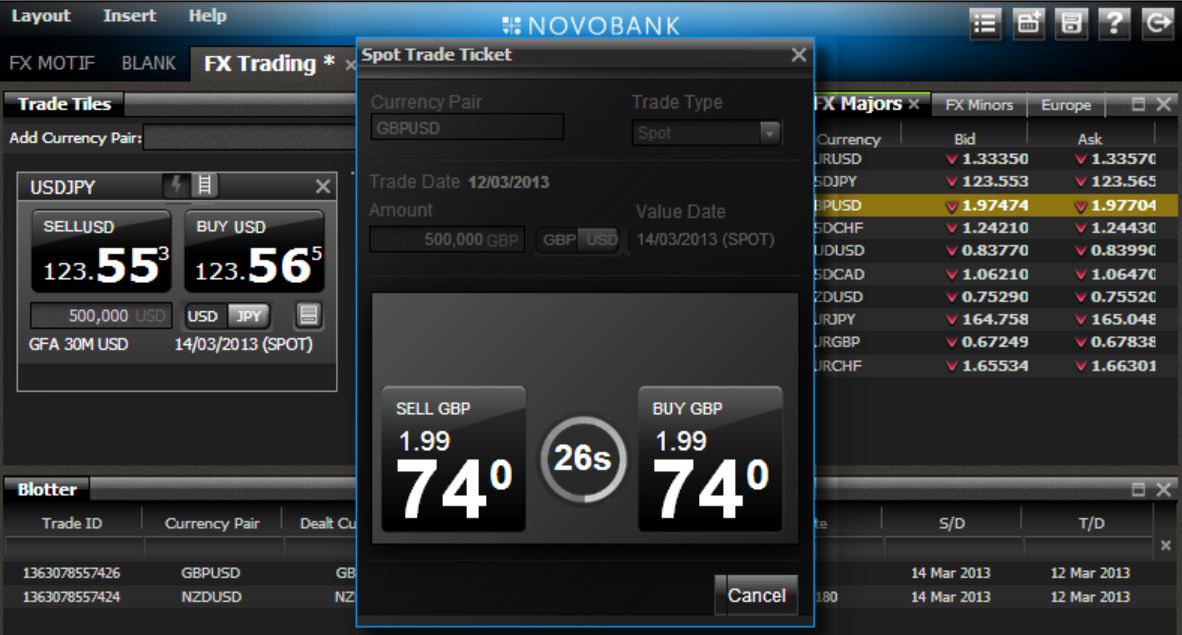 Create a new general project in Eclipse (or your preferred IDE) for your Caplin Trader installation and set the location to wherever you unzipped Caplin Trader.

If you are using Eclipse, you will find it useful to install the Eclipse Web Developer Tools and JavaScript Development Tools plugins, so that from this point on you get syntax highlighting and basic auto-complete for JavaScript and HTML files.

After creating the project In Eclipse, or your favoured IDE, you should see the following BladeRunnerJS/Caplin Trader structure. 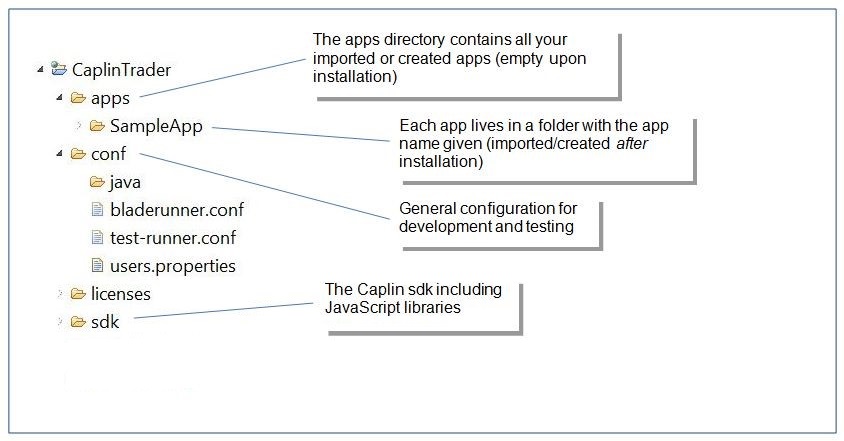 The following diagram highlights the main resources and code located at the app-level. The app nests any number of bladesets inside it. 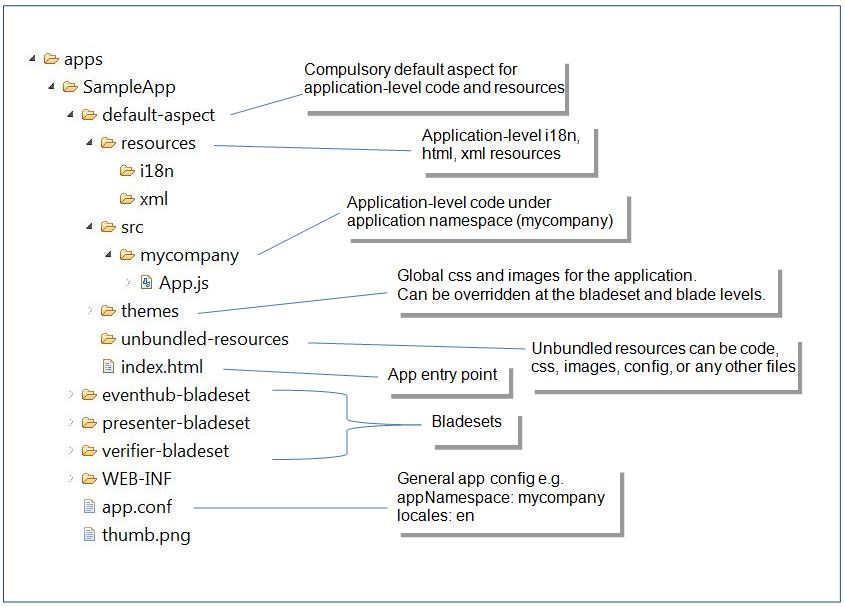 The following diagram highlights the main resources and code located at bladeset level. A bladeset typically contains a number of related blades; for example, an FX bladeset contains an FX tile blade, an FX ticket blade, and so on. Therefore, the bladeset would contain code for making FX trades and resources, such as common FX trade models; or localised FX terms that are used by several of the nested blades.

Components are developed inside blades in such a way that all the components' functionality is encapsulated within the blade. The following diagram highlights the main resources and code located at blade level.

Any component developed with BladeRunnerJS can be showcased and tested in a standalone environment called a workbench. To see the workbench of one of the blades in the motif we have just imported, click Run in workbench: 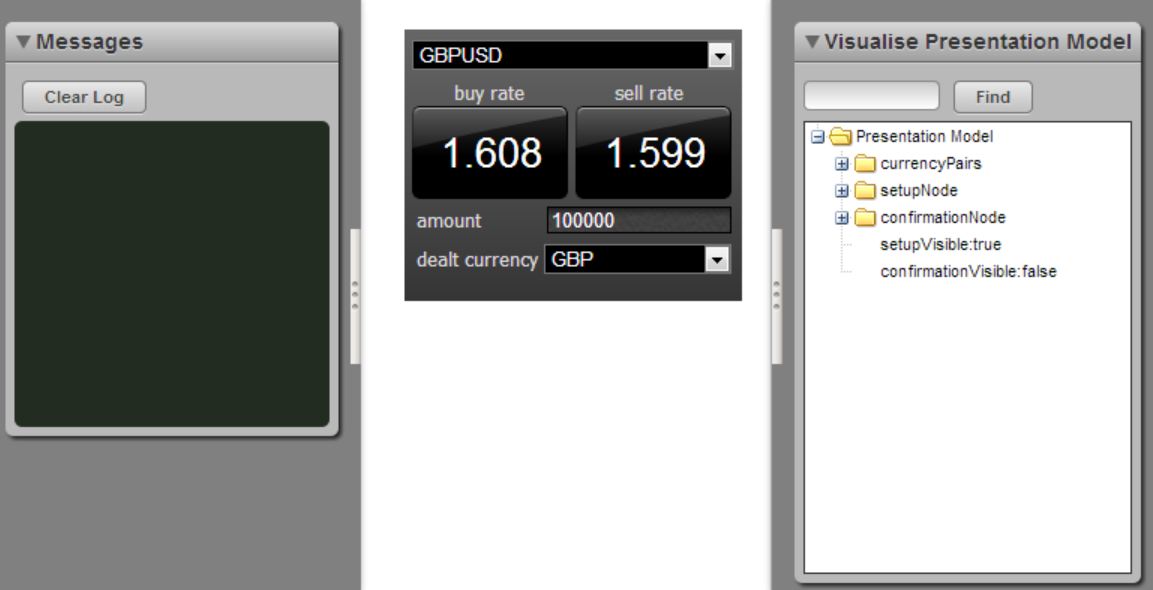 The workbench, being a testing environment, contains no connection to the server. Instead, libraries, such as those for trading and pricing, include workbench widgets that can be connected to stubs to simulate communication with the server.

The following image shows a more complete trade tile workbench that contains a widget for sending price updates, toggling trading availability on the server and for following the trade states and simulating server-sent trade events such as TradeConfirmation. This allows you to see the behaviour of the tile component in a completely standalone environment.

We are not going to use the SampleApp for the rest of the training course, so after you have finished looking around you can safely delete it. This will help avoid confusion later on when we import different apps with similarly named files.

Having completed the tutorial, you should now be able to install BladeRunnerJS or Caplin Trader 4 and have a clear understanding of how to structure an HTML 5 or trading application by breaking it down into a set of bladesets and component blades. You should also be aware that you can develop a new component within a blade using a workbench and utility widgets before integrating the component into the application.